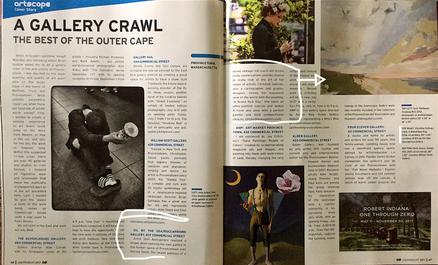 exhibition whose goal is to showcase "a regional survey of contemporary art.”

unique qualities representative of contemporary art. A catalog will be produced for

this show and awards will be given at the opening reception September 23, 2017.

The STB is presented by the Cattaraugus County Arts Council (CCAC), the Olean

Cattaraugus Region Community Foundation (CRCF) made possible by an endowment from the estate of F. Donald Kenney. 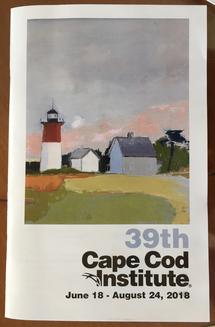 Christine Sullivan's July Solo/Featured Artist exhibition at Oils By The Sea / ROCCAPRIORE Gallery in Provincetown was mentioned and an image of her painting"Brand New Day"18 x 24" included in ARTSCOPE Magazine's "Best of the Outer Cape Gallery Crawl" article in the July/August 2017 issue. 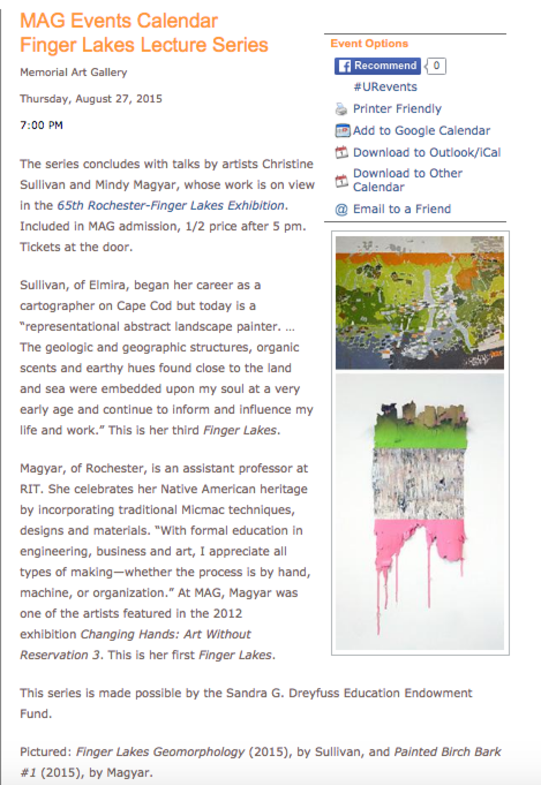 Christine Sullivan's "Nauset Twilight"(detail) was chosen as the

cover art for the 2018 Cape Cod Institute catalog and website.

Each year the catalogue features a Cape-based artwork and

artists featured in the past include Paul Resika, Jim Forsberg,

permission and from the Provincetown Art Association and

Museum collection). The Cape Cod Institute is a summer-long

series of week-long courses taught by leading contributors to knowledge and practice for health and mental health professionals, as well as OD and HR practitioners, and educators at all levels.

long artist residency. She was awarded a merit-based grant to attend

their residency program in 2015.
The Vermont Studio Center was founded by artists in 1984.

Situated along the banks of the Gihon River in the historic

village of Johnson, Vermont the intention of VSC is to foster

supported by the unspoiled beauty of the northern Green Mountains.  Over the last 30 years, VSC has grown to become the largest international artists' and writers' residency program in the United States. Their mission is to provide studio residencies in an inclusive, international community, honoring creative work as the communication of spirit through form.
vermonthstudiocenter.org

Every two years, Rochester’s oldest and longest-running juried exhibition showcases the talents of emerging and established artists from a 27-county region of western New York. The 2015 show was juried by Michael Rooks, Wieland Family Curator of Modern and Contemporary Art at Atlanta’s High Museum of Art. He chose 68 works by 46 artists from a field of 920 entries by 330 artists. Sullivan's Finger Lakes Geomorphology was chosen for the show and received the OXFORD GALLERY AWARD, one of eight awards chosen by Juror Michael Rooks.

Christine Sullivan wasn't sure she could make a career as a full-time artist until she was chosen
for her first Finger Lakes exhibition in 2011. Since then, she has exhibited her oil paintings at
numerous galleries from Massachusetts to Florida and beyond. This year will be her third time
at Finger Lakes. "It made all the difference in the world," said Sullivan...

Artists Creating is a non-profit bi-monthly online pdf magazine created and published by Keith Hampton. It is filled with art, poetry, short stories, interviews and articles on the regions creative life. Christine's painting, The High Road was selected for the cover of the December 2018/ January 2019 issue. 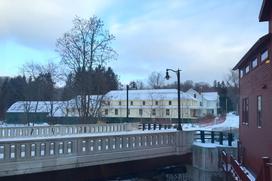 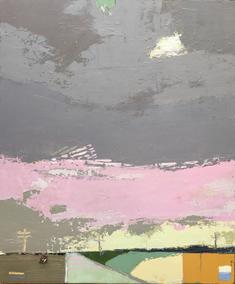 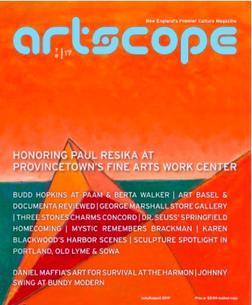 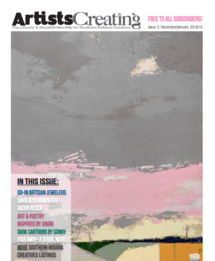