Every day a piece of me is born. I flip pages of poetry, head tilted at the sky, remembering loved ones passed, the days too, as clouds carry moments by. I start quickly by drawing with large chunks of graphite or a thick twine of charcoal, putting the shale fragments once lost back together to form a new story. A stronger version built from a romance with nature. Onshore breezes rush through my hair as I take solace. Acres of farmlands carrying the pungent aroma of fertilizer. Splinters of the red barns of my childhood that nourished me. The branches and leaves where the songbirds live. When I am quietly working in the studio these are the land-stories that visit me like late afternoon shadows passing across the floor.

Every day a piece of me dies. Breaks off. Like an eroding limestone wall where shards of myself tumble down its surface and gather in fragmented piles unaware that this is how it all works. This natural way of things. Life. Loss. And I wonder, will a fossil carry a piece of my life in its story? This is the bedrock of my painting process. Erosion. Renewal. Paint. Allowing Earth’s telluric current to pass through while I attack the canvas, flipping between excavating beneath the surface like a paleontologist and chasing upward to a birds-eye view of the freshly turned fields below after which I retreat down a well-trodden path through a canopy of trees. Bathing in the trade winds. Tapping at the underbrush. Thinking all the while about the grief life brings. Fallen fragments like leaves at my feet revealing stories long forgotten. They tumble into the paint as I push and prod the thick paint with wide brushes and large palette knives.

Every morning I watch the birds. They come and swing on the ends of limbs then drop down to visit me, softening my heart. Preparing me for the day. There is a longing in their song. A language that echoes across the years and I can almost hear the slow glacial retreat of life taking place and grasp at its frailty, its sweet brilliance. Feeding, tending, migrating, sharing the roots that communicate silently like synapses they join me in the studio. 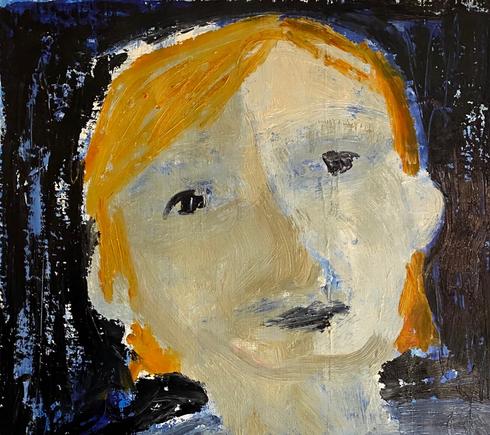 Christine Sullivan is a fourth-generation landscape painter. She holds a degree in Physical Geography, had an early career as a cartographer followed by a successful career in television advertising before making the leap to art full time in 2009. Sullivan’s work is now collected across the USA, Canada, and Europe. Christine currently lives and has a studio in Columbus, Indiana, and is on the board of the Columbus Museum of Art & Design.

Christine is an American landscape painter (b. 1957 Syracuse, NY). Her degree in physical geography and studio art from Plymouth State University (NH) supplied her with a unique and heightened appreciation for New England landforms. Prior to becoming a full-time painter, Sullivan had a varied and successful business life. After college she once again summered on Cape Cod and in the Fall landed a job as a cartographer. Here she learned the graphic arts and publishing business yet the winters seemed desolate and she moved back to her hometown of Fayetteville, NY, and worked as Chief Cartographer for a larger map-making company in Syracuse. She later entered into the world of advertising, starting with a job as a graphic artist in the corporate marketing department of Newhouse Broadcasting's Newchannels Corporation where she quickly expanded her creative skills to include newspaper, radio and television advertising and became fluent with the Macintosh. Concurrently her personal life was expanding as she and her husband, Jim, had a beautiful baby girl in 1991. Christine, now working long hours in the office as Creative Director and even more hours as a new mom, found the perfect release - painting. Her watercolors, once inspired by the works of Andrew Wyeth, were now leaning to a more abstract approach and soon a unique style emerged and she began showing and selling her work.
In 1994, after three of Syracuse's most brutal winters, Christine's career took another jump as she was recruited to help launch a new cable television network, the Golf Channel, and she and her young family picked up roots and moved to Orlando, FL.  Over the next fifteen years Christine and her in-house creative team built the company into an international brand and garnered several national and international awards. As this left little time for painting Sullivan would visit several museums across the United States while traveling, returning often to The Art Institute of Chicago where she would sit in front of a large Pollock with a deep yearning. She was also inspired by the progress her mother, E. Gloria Coffman, was making as a painter on Cape Cod. Her parents had vacationed in East Orleans with their four children (Christine has three older brothers) every summer since 1964 and were able to realize their retirement dream in 1986 by moving there full-time. Her mom, after a forty-year hiatus, picked up her brushes and was quickly gaining success. Together, they would gallery hop, review paintings and talk about the art life. Each time, she left the Cape quietly knowing this is what she was meant to do with her life. And she didn't want to wait. A discussion shortly followed and in 2009, her daughter off to college, she walked away from her position as Senior Vice President of Marketing & Brand Management at the Golf Channel and began her journey as a professional artist.
Christine also decided to leave her watercolors behind and ventured head-on into contemporary oil painting under the guidance of John J.J. Graham at his Hollingsworth Gallery / SECCA School of Art (Southeast Coalition of Contemporary Artists) in Palm Coast, FL. It was here that J.J.‘s passion for the abstract expressionists took hold and she spent an entire year experimenting with various techniques, mediums and tools while studying the works of the masters and committed to painting daily. She began hoarding books on her favorite artists - first, it was Wolf Kahn for his color work, Helen Frankenthaler for her almost watercolor-like oils and Milton Avery for his soft approach. Graham also introduced her to the California painters - mainly David Park and Richard Diebenkorn - and an exciting handful of others including Lucian Freud, Emil Bischoff and Frank Auerbach. But when she was able to see and study these painters' works in person at Art Basel/Art Miami she became truly inspired and determined to elevate her game.
Sullivan dug deeper into the studio, became a prolific experimental painter and developed a unique style and palette. Christine began to reach out to artists on Cape Cod while visiting her now aging parents and the Provincetown Art Association and Museum school (PAAM) proved a savior.
In 2011 her work began being accepted into several prestigious regional group exhibitions including one at the Memorial Art Gallery in Rochester, NY. It was here that she discovered a large painting by Fairfield Porter, a painter she had studied but had never seen in person. This was another turning point as she saw in his work a way to capture the soul of a place through representation and realized this was to be her intent. Later that year she was awarded a 4-week artist residency by the Community Arts of Elmira to work on her conceptual "clothesline project" - paintings that celebrated the backyards of life in and around the Finger Lakes Region of NYS. She quickly built a new body of work based on the clothesline and in the Spring of 2012 had her first solo show back where it all began - at Hollingsworth Gallery in Palm Coast, FL.  It was shortly after this show that Christine's mother passed and while back on the Cape helping her Dad she took her first workshop with Cynthia Packard in Provincetown. Cynthia was instrumental in getting Sullivan to dig within for inspiration to help work through her grief and introduced Christine to her mother, Anne Packard, who invited her into her home studio for specific guidance and consultation.

In 2013, after several more group exhibitions, the Gargiulo Art Foundation, a not-for-profit organization whose purpose is to support the arts, artists and arts-in-public places, named Christine their "Artist of the Year 2013" and awarded her a solo exhibition which helped to launch her emerging career into gallery representation as did the acceptance in the 2013 Rochester-Finger Lakes Exhibition. During her frequent trips to the Cape she continued her workshops now with both Cynthia and Anne Packard as part of their new, joint landscape-from-life workshops taught on the deck of Anne's Provincetown's home. She would follow these with a week-long painting workshop on Nantucket under Thomas R Dunlay, a renowned Boston School painter who was taught by R.H. Ives Gammell.

In March of 2015, Sullivan was awarded a merit-based grant to attend The Vermont Studio Center's 4-Week Artist Residency program. In July Christine was juried into her third Rochester-Finger Lakes show and was awarded the Oxford Gallery Award by juror Michael Rooks, Wieland Family Curator of Modern and Contemporary Art at Atlanta's High Museum of Art. The was followed by her solo show in August at the Oils By The Sea / ROCCAPRIORE GALLERY in Provincetown, MA and in September she was awarded a jurors award for two of her large scale works in the Southern Tier Biennial and shortly after gave her first artist talk at the Memorial Art Gallery / Museum entitled, "The Geography of  Color."

In February of 2016, Christine spent four weeks almost "off the grid" at the Vermont Studio Center Artist Residency Program experimenting with new ideas and concepts based on her explorations of the deep and historic granite rock quarries of Barre, Vermont and her early years studying local geography, topography and cartography. She received helpful guidance and profound influences from her studio visits with highly acclaimed artists David Kapp, Marie Lorenz, Kevin Appel and Xaviera Simmons.

Early into the pandemic of 2020, with her exhibitions on hold and isolated at home, it was Cynthia Packard's "Fridays and Sundays at 1 pm Facebook Live Online Workshops" that got her back in her studio where she started working on still lifes and thinking more deeply about what painting meant to her. As the weeks turned into months and unable to travel to Provincetown, Cape Cod for the first time in her life it was Castle Hill's Truro Center for the Arts Executive Director Cherie Mitthenthall that led her to an online artist residency led by critically-acclaimed New York artist and Guggenheim Fellow Michael David. Michael's YELLOW CHAIR SALON VIRTUAL RESIDENCY. assisted by Stephanie Hargrave, brought together nearly 100 artists to meet in small groups every other week to discuss and explore ways to be more authentic and honest with themselves and their work. Michael invited a number of guest artists including Judy Pfaff, Mark Milroy, Paul D'Agostino, Elisabeth Condon, Deborah Dancy, David Cohen, Kara Rooney, Meryl Meisler, Brenda Goodman, Glenn Goldberg, and Kyle Staver to offer one-on-one critiques to the residents and kept art topics alive through research and readings. As the residency tightened up the artists involved were able to build new connections with each other, share their works, deepen their practice and see their work elevated. Sullivan is currently starting on her fourth 4-month residency and has seen her studio practice take on a new rigor.

Christine and her husband left their snowbird life shared between Northern Florida and Upstate New York to live near their daughter in Columbus, Indiana - a small yet vibrant city about an hour south of Indianapolis and internationally known for its modernist architecture and design. Her studio is located at 217 Washington Street within the Arts & Entertainment District. Sullivan is on the board of the Columbus Museum of Art & Design (CMAD), a volunteer-led granting organization that supports and works with organizations to bring unique visual art and design projects to the Columbus community.